An Afternoon with Bono in Conversation with Jon Meacham 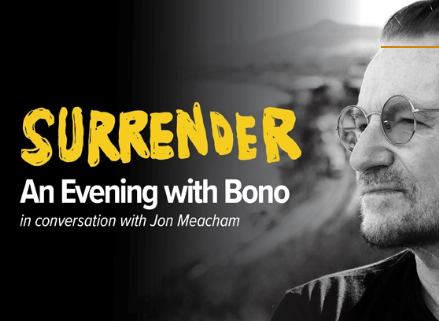 Just announced!
Join the audience at Washington National Cathedral for a live streamed conversation with legendary singer-songwriter, activist, and global humanitarian Bono to discuss his new memoir, Surrender, with Cathedral Canon Historian Jon Meacham. Surrender is the story of the remarkable life he’s lived, the challenges he’s faced, and the friends and family who have shaped and sustained him. In his unique voice, Bono takes us from his early days growing up in Dublin, including the sudden loss of his mother when he was fourteen, to U2’s unlikely journey to become one of the world’s most influential rock bands, to his more than twenty years of activism dedicated to the fight against AIDS and extreme poverty.