This page lists the current adult Christian education programs at St. Michael and All Angels, Corona del Mar, and some study resources for participants. Active links are shown in red. Just click to open the link. Suggestions for additional resources are welcome, but their publication cannot be guaranteed. Send recommendations and other comments to Norris Battin.

Click links in the below table to go directly to the respective sections on this page.

New Revised Standard Version (NRSV) is an English translation of the Bible published in 1989 by the National Council of Churches. It is a revision of the Revised Standard Version, which was itself an update of the American Standard Version. The NRSV was intended as a translation to serve the devotional, liturgical, and scholarly needs of the broadest possible range of religious adherents. Most scripture readings at SMAA are taken from the NRSV which is used widely throughout The Episcopal Church in the United States.

New International Version The NIV was published to meet the need for a modern translation done by Bible scholars using the earliest, highest quality manuscripts available. Of equal importance was that the Bible be expressed in broadly understood modern English.

The Message A fresh paraphrase into contemporary language and idiom by Eugene Peterson.

If I had my life to live over, I'd dare to make more mistakes next time. I'd relax, I would limber up. I would be sillier than I have been this trip. I would take fewer things seriously. I would take more chances. I would climb more mountains and swim more rivers. I would eat more ice cream and less beans. I would perhaps have more actual troubles, but I'd have fewer imaginary ones.

You see, I'm one of those people who lived sensibly and sanely, hour after hour, day after day. Oh, I've had my moments, and if I had to do it over again, I'd have more of them. In fact, I'd try to have nothing else. Just moments, one after another, instead of living so many years ahead of each day. I've been one of those persons who never goes anywhere without a thermometer, a hot water bottle, a raincoat, and a parachute. If I had to do it again, I would travel lighter than I have.

If I had my life to live over, I would start barefoot earlier in the spring and stay that way later in the fall. I would go to more dances. I would ride more merry-go-rounds. I would pick more daisies.

A thought from Rainer Maria Rilke:

Be patient toward all that is unsolved in your heart and try to love the questions themselves, like locked rooms and like books that are now written in a very foreign tongue. Do not now seek the answers, which cannot be given you because you would not be able to live them. And the point is, to live everything. Live the questions now. Perhaps you will then gradually, without noticing it, live along some distant day into the answer.

In the Davis Library 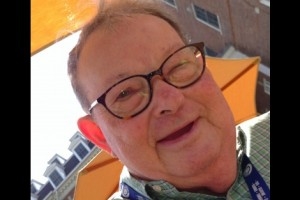 All are welcome at St. Mike's!

St. Michael and All Angels celebrates Holy Eucharist: Rite II in the summer on Sunday morning at 9 AM live on Zoom.
Stick around after the service for fellowship and virtual coffee hour.