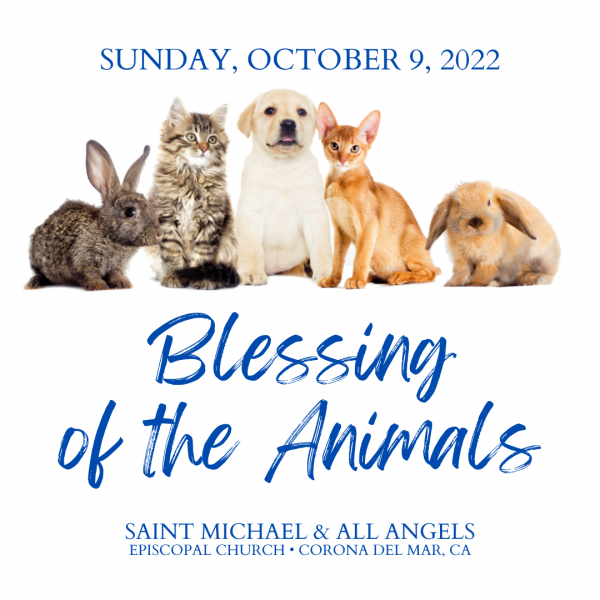 Celebrate St. Francis and St. Clare Week with us. Bring your pet to receive a blessing. Dogs should be kept on leash. Cats and exotic pets should be secured in a carrier. If you have a question about bringing your pet, contact the church office. You may also bring a photo or other keepsake of your pet.

Read more about the traditional Franciscan Blessing of the Animals here:
https://www.franciscanmedia.org/franciscan-spirit-blog/blessing-of-animals

About Francis of Assisi

(1181 or 1182-Oct. 3, 1226). Thirteenth-century saint and founder of the Franciscan order. He was born in Assisi in central Italy and named Giovanni Bernardone. His father changed his name to Francesco, “the Frenchman,” after a visit to France. Francis's gradual conversion began in the spring of 1205. He gave generously to the poor and became devoted to “Lady Poverty.” Francis stressed absolute simplicity of life marked by poverty, humility, and contemplation of Christ. Others gathered around him, and on Feb. 24, 1209, the Order of Friars Minor (Fratres minores), sometimes called Minorites, was founded. In England they were popularly called Grey Friars because of the color of their habit. The Second Order of St. Francis, known as the Poor Clares, was established for nuns in 1219. The Third Order for lay men and women was founded in 1221. Francis is especially remembered for his writing, “The Canticle of Brother Sun.” The Hymnal 1982 includes two hymn texts written by Francis, “All creatures of our God and King” (400) and “Most High, omnipotent, good Lord” (406-407). The hymn text “Lord make us servants of your peace” (593) is based on a prayer attributed to Francis. He died in Assisi. Francis is commemorated in the Episcopal calendar of the church year on Oct. 4. See Clare; see Franciscan Spirituality.

About Clare of Assisi

(July 16, 1194-Aug. 11, 1253). She was born in Assisi, Italy. Clare came under the influence of St. Francis. On Mar. 18, 1212, she took the three monastic vows of poverty, chastity, and obedience, and went to reside in the Benedictine convent of St. Paul in Assisi. Soon she was joined by her sister Agnes, and Francis made a cloister for them near the Church of St. Damian. This was the beginning of the order of Poor Clares, and Clare became the abbess in 1215. The rule of the order was one of extreme poverty and austerity. She was canonized by Pope Alexander IV in 1255. There is an order of the Poor Clares of Reparation in the Episcopal Church. Clare died in Assisi. She is commemorated in the Episcopal calendar of the church year on Aug. 11.